Life in Code and Software 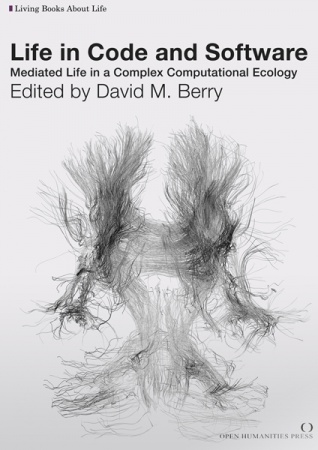 Introduction: What is Code and Software?

This book explores the relationship between living, code and software. Technologies of code and software increasingly make up an important part of our urban environment. Indeed, their reach stretches to even quite remote areas of the world. Life in Code and Software introduces and explores the way in which code and software are becoming the conditions of possibility for human living, crucially forming a computational ecology, made up of disparate software ecologies, that we inhabit. As such we need to take account of this new computational environment and think about how today we live in a highly mediated, code-based world. That is, we live in a world where computational concepts and ideas are foundational, or ontological, which I call computationality, and within which, code and software become the paradigmatic forms of knowing and doing. Such that other candidates for this role, such as: air, the economy, evolution, the environment, satellites, etc., are understood and explained through computational concepts and categories. (more...)

Eric W. Weisstein
What is a Turing Machine?

Achim Jung
A Short Introduction to the Lambda Calculus

Alan M. Turing
Extract from On Computable Numbers, with an Application to the Entscheidungs Problem

Video of a Turing Machine - Overview

Louis McCallum and Davy Smith
Show Us Your Screens

A short documentary about live coding practise by Louis McCallum and Davy Smith.

why the lucky stiff
Hackety Hack: Learning to Code

why the lucky stiff (or _why) is a computer programmer, talking about learning to code.

David M. Berry
A Contribution Towards a Grammar of Code

Dennis G. Jerz
Somewhere Nearby is Colossal Cave: Examining Will Crowther's Original "Adventure" in Code and in Kentucky

A fascinating look inside cyber-forensics and the processes of reading code to understand how it works and what it attacks.


A short film on livecoding presented as part of the Critical Code Studies Working Group, March 2010, by Stephen Ramsay. Presents a "live reading" of a performance by composer Andrew Sorensen.


As software/code increasingly structures the contemporary world, curiously, it also withdraws, and becomes harder and harder for us to focus on as it is embedded, hidden, off-shored or merely forgotten about. The challenge is to bring software/code back into visibility so that we can pay attention to both what it is (ontology/medium), where it has come from (media archaeology/genealogy) but also what it is doing (through a form of mechanology), so we can understand this ‘dynamic of organized inorganic matter’.

Gabriella Coleman
The Anthropology of Hackers

"Deleuze and Computers" - a lecture by Alexander R. Galloway at the W.E.B. Du Bois Library at the University of Massachusetts Amherst on December 2nd, 2011.

Gary Wolf
The Quantified Self

The notion of using computational devices in everyday life to record everything about you.

As you surf the Web, information is being collected about you.