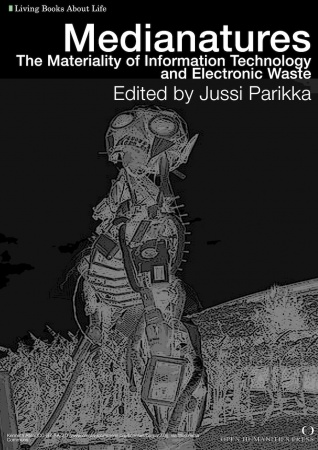 The Materiality of Information Technology and Electronic Waste

Introduction: The Materiality of Media and Waste

Medianatures picks up from Donna Haraway’s idea of naturecultures – the topological continuum between nature and culture, the material entwining and enfolding of various agencies, meanings and interactions. Medianatures gives the concept of naturecultures a specific emphasis, and that emphasis is at the core of this living book. It is a useful concept and framework for investigating some of the ways in which our electronic and high-tech media culture is entwined with a variety of material agencies. The notion of ‘materiality’ is taken here in a literal sense to refer, for instance, to ‘plasma reactions and ion implantation’ (Yoshida, 1994: 105) – as in processes of semiconductor fabrication, or to an alternative list of media studies objects and components which are studied from an e-waste management perspective: ‘metal, motor/compressor, cooling, plastic, insulation, glass, LCD, rubber, wiring/electrical, concrete, transformer, magnetron, textile, circuit board, fluorescent lamp, incandescent lamp, heating element, thermostat, brominated flamed retardant (BFR)-containing plastic, batteries, CFC/HCFC/HFC/HC, external electric cables, refractory ceramic fibers, radioactive substances and electrolyte capacitors (over L/D 25 mm)’, and which themselves are constituted from a range of materials – plastics, wood, plywood, copper, aluminum, silver, gold, palladium, lead, mercury, arsenic, cadmium, selenium, hexavalent chromium and flame retardants (Pinto, 2008). (more)

Richard W. Clapp
Mortality Among US Employees of a Large Computer Manufacturing Company: 1969-2001

Jonathan G. Koomey
Growth in Data Center Electricity Use 2005 to 2010

Matteo Pasquinelli
Four Regimes of Entropy. For an Ecology of Genetics and Biomorphic Media Theory

Phone Story: an educational game about the dark side of your favorite smart phone