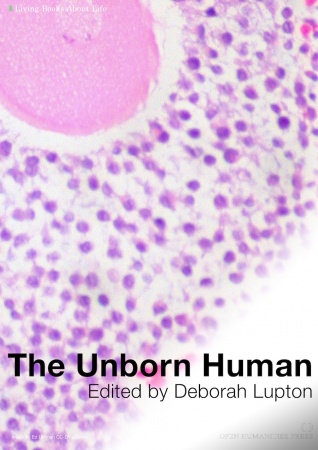 Unborn human organisms – embryos and foetuses – experience an unprecedented level of discursive prominence in the contemporary era. Debates about the moral status of the unborn, about their claims to personhood and whether they should be treated as full human subjects, have been ongoing for a long time, particularly in areas related to religious philosophy, bioethics and abortion politics. Over the past half-century, however, these debates have become more diversified, intense and complex in response to a number of social, technological and economic changes. More so than at any other time in human history, embryos and foetuses are represented in public forums as beautiful, precious, vulnerable creatures that require the utmost levels of protection. They are commonly positioned as already fully human, indeed as already infants, and hence as deserving of the rights and privileges accorded the infant. (more)

Mourning and Remembering the Lost Unborn

Struggles Over Dealing with the Unwanted Unborn

Assessing the Quality of the Unborn

S Wang
The past, present, and future of embryo selection in in vitro fertilization
A Theodosiou and M Johnson
The politics of human embryo research and the motivation to achieve PGD
Termination of Pregnancy for Fetal Abnormality in England, Scotland and Wales
S Aksoy
Antenatal screening and its possible meaning from the unborn baby's perspective
F Place
Amniocentesis and motherhood: how prenatal testing shapes our cultural understandings of pregnancy and disability
Parliamentary Inquiry into Abortion on the Grounds of Disability

H Barniville
The morphology and histology of a human embryo of 8.5 mm
‘Making Visible Embryos’ website
‘Lennart Nilsson Photography’ website
‘The Visual MD’ (Alexander Tsiaras’s company) website
‘The Visible Embryo’ website
‘The Multi Dimensional Human Embryo’ website
‘In the Womb’ (excerpt from a National Geographic documentary)
‘The Miracle of Life Part 1’ (excerpt from Lennart Nilsson's documentary)
Alexander Tsiaras's TED talk about his visualisations of the unborn
‘The Sociology of the Unborn’ Pinterest board
E Tansey and D Christie (eds)
Looking At the Unborn: Historical Aspects of Obstetric Ultrasound
N Reissland, B Francis, J Mason and K Lincoln
Do facial expressions develop before birth?
‘The Ultrasound as Cultural Artefact’ Pinterest board

Bringing the Maternal Body Back In

J Souza, A Oliveira-Neto, F Surita, J Cecatti, E Amaral and J Pinto e Silva
The prolongation of somatic support in a pregnant woman with brain-death: a case report
D Riggs and C Due
Gay men, race and surrogacy in India
A Bosanquet
An image carnal and divine: angels playing with placenta